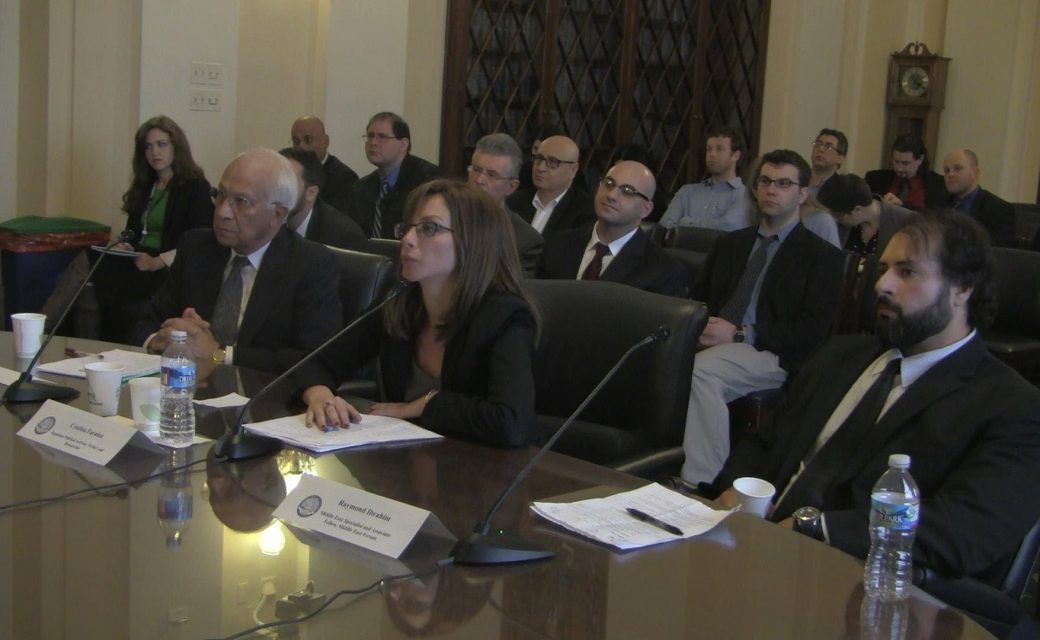 Published on February 10, 2012 on The Objective Standard

Cynthia Farahat is an Egyptian political activist, writer and researcher. She co-founded the Liberal Egyptian Party (2006–2008) and served as a member of its political committee. In 2008-2009, she was program coordinator and program officer at the Friedrich Naumann Foundation for Liberty in Cairo, a multi-national free market think tank. She was a founder of the Masr El-Om (Mother Egypt) Party and was a member of its political committee (2004–2006). She is a fellow at the Middle East Forum and the Center for Security Policy. She has been published in the Middle East Quarterly, and in other publications in both English and Arabic. In December 2011, Ms. Farahat testified before the Tom Lantos Human Rights Commission in the US House of Representatives on the roots of the persecution of the Coptic Christian minority in her native Egypt.

I recently had the pleasure of interviewing Ms. Farahat on Egypt, Ayn Rand, the Muslim Brotherhood, and U.S. foreign policy. —JL

Joshua Lipana: What was it like growing up as a girl in Egypt?

Cynthia Farahat: It was horrible! My mother raised my brother and me, as complete equals. She instilled in us that individuals are defined by their choices, actions, and merits. So you can imagine, with that upbringing, I was culturally shocked every time I left my house. Even to go grocery shopping was to risk getting sexually harassed, spat on, or hearing offensive, derogatory remarks while walking in the street. My first real introduction to Sunni tribalism was when a friend and I walked in the street without an adult for the first time, when I was 13 or 14. We were smiling and happy, and she said something funny and I laughed. For that, we ended up being cursed, spat on, and chased down the street by a group of thugs swearing to hurt us and “teach us a lesson.” We ran home horrified and crying without the slightest idea of what we had done wrong. This was not an “isolated” incident; this is the norm.

Arab culture is misogynist, and gynophobic. The state systematically degrades and demonizes women. According to Arab Islamic culture, all women are whores until proven opposite, and you certainly can’t prove the opposite. Wearing makeup and dressing fashionably is considered an invitation to sexual harassment and sometimes rape. Egypt is governed by a Sharia-based constitution, and Sharia law does not define rape as a crime. Rape was only criminalized in Egypt in 1997. You can imagine how bad the situation is for most women in a country where the military arrests female protestors, strips them naked, beats them in the streets, and gives them “virginity tests.”

JL: How did you intellectually break free of that culture?

CF: I didn’t, as I was never part of it. We had an entirely different upbringing than most Egyptians, our family and morality were much closer to being European than what you’d call conventional Egyptian. Egypt before 1952’s Islamic socialist coup d’état was culturally closer to Europe than Arabia. And many Egyptian families still belong to Egypt’s classic liberal era.

JL: What kind of culture and government would you like to see in Egypt?

CF: Egypt needs to reclaim its sovereignty first. Saudi Arabia—through its petro-dollars—has been funding the ideological subversion of Egypt through the international Muslim Brotherhood organization almost since its inception in 1928. The Brotherhood infiltrated Egypt’s military in the 40s and perpetrated the military coup that destroyed Egypt beyond recognition.

As for my dream for Egypt, it’s simply small government, laissez-faire capitalism, individual liberty, and the ideals of the American Founding Fathers. The American constitution is a glorious document; I dream for something similar for my country, and it’s not so far fetched, as Egypt had a great constitution and significant individual freedom in the 20s. But this will only be achieved when the world starts to confront the blood oil of Saudi Arabia and Iran; Ethical Oil is the first step toward a serious solution.

JL: Which thinkers have influenced your pro-freedom views?

CF: Since my childhood my family exposed us to western classic literature and arts. I have always had pro-freedom views, when one is consistently rational and objective it’s hard to come to different conclusions. But also the key is that my views were never defined by my shortcomings, whether financial, emotional, physical, or psychological, so I was never a theocrat, a socialist, or anti-freedom in any way. But no one was able to communicate my ideas and emotions like Ayn Rand did, she put the ideals I always adhered to in perspective and articulated them better than I ever will. The first book I read of Rand was Anthem, and I relate to this book on a very personal level. It parallels our battle for freedom under Islamic totalitarianism where individualism is the worst crime one can commit. The Egyptian state, through several laws, punishes those who don’t abide by the moral, religious, and dress codes of Islamic Sunni tribalism.

JL: In a testimony in the Tom Lantos Human Rights Commission in the House of Representatives, you stated that the rulers of Egypt are not the “secular autocrats” they would have the West believe.  Would you elaborate on this?

CF: I’m always baffled and shocked that Westerners believed what Arab Sharia theocrats tell them! Just like Arafat told Westerners one thing in English and told his people the opposite in Arabic, it was exactly the case with every Arab dictator, including in Egypt. Egyptian President Anwar Sadat, Hosni Mubarak, and now the Supreme Council of Armed Forces (SCAF), govern Egypt by Sharia based constitutions; so the accurate term to describe them is not “secular autocrats”, but “constitutional theocrats.”

JL: It is generally conceded that Mubarak was a despicable man, but many believe that he and his regime served to prevent the Islamists from attaining power in Egypt. To give one example, Peter Huessy recently said that the United States should not have withdrawn support from Mubarak because he “was a bulwark between the Muslim whackos getting government power in Egypt and using the Suez Canal as a lever.” What is your view on this?

CF: With all my respect to Mr. Huessy, this is a grave misconception. This popular idea—which endangers the lives of millions of people in the Middle East and helps the Islamists—is a result of one of the biggest political scams in modern history. While Mubarak portrayed himself as the “shield against radical Islamism,” he governed Egypt with a Sharia-based constitution and threatened, imprisoned, tortured, abducted, and killed classical liberal secularists, among them many of my friends who were by default the real shield against terror and Islamism.

Mubarak’s Islamist regime rebuffed two political parties I co-founded by two court orders for being secular, classical liberal, and pro-normalization with Israel, and threatened and harassed and terrorized me almost daily for a decade. Mubarak did all this while allowing the legal founding of an Islamist Nazi party in 1990 called Misr al-Fatat, which actually adheres to Nazism and Sharia law.

Mubarak lied and said the Muslim Brotherhood was “banned” while they were the only opposition that was allowed to fully and freely function. He let the Brotherhood acquire millions of dollars in funding from Saudi Arabia and Qatar and have offices in every neighborhood in Egypt. In addition, Mubarak allowed jihadists full control of state media.

JL: What do you think the U.S. government should be doing with regard to the rise of the Muslim Brotherhood in Egypt?

CF: The current administration and State Department obviously want the Muslim Brotherhood in power. When President Obama declared Dalia Mogahed as one of his advisors, I wrote on Facebook that this was going to translate to the advancement of the Muslim Brotherhood and we can kiss our dreams goodbye. The Arabic website of the Brotherhood celebrated Dalia Mogahed’s position in the administration and discussed their strong ties with her in an article that was removed shortly afterwards. Dalia Mogahed’s involvement with the Brotherhood—the founders of al-Qaeda and Hamas—is not a secret.

If we had allies in a different U.S. administration, one that understood and advocated freedom, there are things that could be done that would save Egypt and the Middle East:

JL: What in your view can freedom lovers in America and elsewhere in the civilized world do to help Egyptians who want freedom?

CF: They can do the kind of thing you are doing now—which I’m truly thankful for. They can help spread the message of dissidents, and anti-Sharia Egyptians who speak the truth about what is happening in Egypt.

After a decade of vigorous political activism in Egypt against international Islamism, theocracy, and the military regime, I know how weak the enemies of freedom are. When America is a strong horse like it was during the first term of President Bush’s administration, we were almost invincible; when America is weak and submissive, we get crushed.

JL: Where can readers keep up with you and your ideas?

CF: You can read my ideas about international politics and religion at www.cynthiafarahat.com.

JL: Thank you very much for your time, Cyn.

CF: Thank you so much for having me, Joshua!