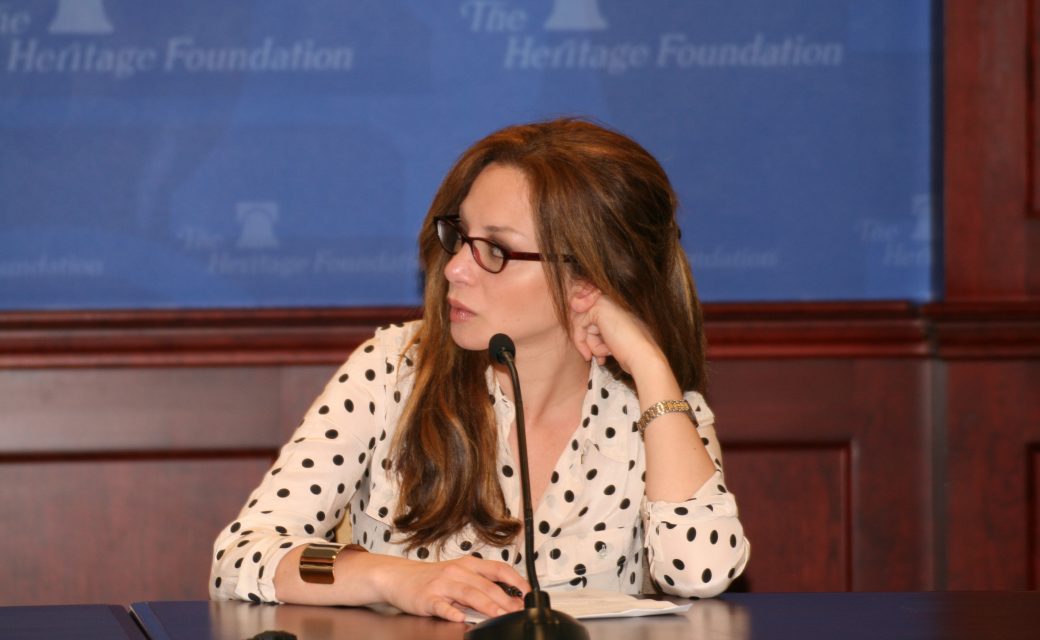 Providing a perspective of the Arab spring not often covered by the mainstream media, female political activist Cynthia Farahat delivered an informative and thoroughly interesting account of her time growing up and living in Egypt.

Speaking to a group consisting largely of D.C. area interns on May 30, 2013, Farahat told of her journey to becoming a political activist in Accuracy in Academia’s first author’s night this year.

Her new book, Cognac is part fictional and part autobiographical: it includes some of Farahat’s real-life stories and experiences living in a repressive government,  first under President Mubarak and then under the Muslim Brotherhood as a result of the 2011 Arab Spring.

Farahat, heavily critical of both government regimes, said she first began to realize the dangers of Egypt’s government at a young age.  She shared with the audience two stories told in Cognac that are “similar to what happens to actual people in Egypt under Mubarak and Sharia law.”

First, Farahat told the audience an incident typical of the Egyptian police.  When a woman asked for help for fear her abusive husband would kill her small children, the police officer simply smirked and responded with, “We might look into it if he does,” Farahat said. Farahat reminded the audience that under Sharia law, husbands legally can hit their wives.

Then, Farahat told how at age 17 she realized the impossibility of her dream: to study art.  Because the Egyptian government decides what each citizen studies at school, Farahat was forced to study law.  But using this in a positive way, she “decided to study religious law to understand the reasons behind the tyranny,” Farahat said.

“My life goals changed from art to trying to change the law that was challenging my identity,” she said. And so Farahat’s career in challenging the Egyptian government’s repressive policies began.

But dedicating her life to challenging Egyptian Sharia law meant being closely watched by the government, Farahat said.  She pretended to hate her family so the government would not persecute them, and one friend was even kidnapped and questioned for several hours.

Yet despite the dangers in speaking out against her country, Farahat, who now lives in the United States, continues to report the dangers of Sharia law and the new Muslim Brotherhood regime.

She urged the audience also to also challenge freedom-depleting policies: “Submission is so much more dangerous than rebellion,” she said. “The only current super power in the world right now is the individual,” she added. “That is the only reason I’m alive right now.”

And when one audience member asked what lessons can be learned from Egypt’s repressive state, Farahat warned Americans to be cautious of the United States’ path towards arguably oppressive policies.

“Start with America,” she said. “I’m beginning to feel the same feelings of being watched in Egypt now in America,” Farahat warned.

And if the United States continues down the road towards nontraditional, anti-west philosophy, she said, “[America] is not just going to be the United Kingdom – it’s going to be the Soviet Union – and we all need to do something about it.”

Isabel Mittelstadt is an intern at the American Journalism Center, a training program run jointly by Accuracy in Academia and its sister organization, Accuracy in Media.
If you would like to comment on this article, e-mail [email protected]