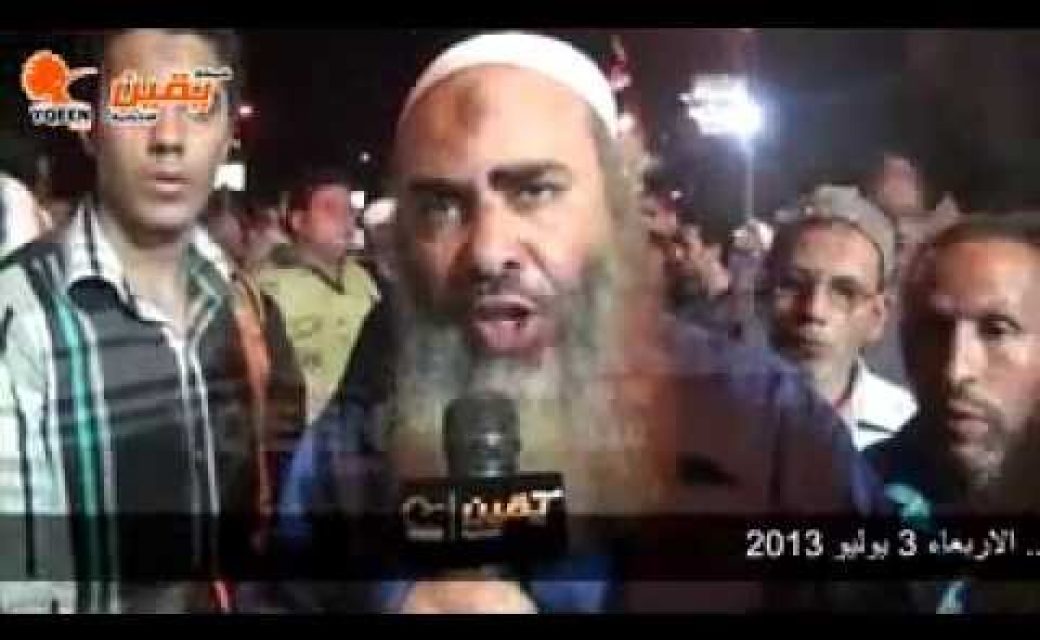 On July 5th, Muslim Brotherhood (MB) militants declared that they will establish a “Taliban style state that harbors al-Qaeda” along with death threats to Abdul Fattah al-Sisi, Minister of Defense, as well as threats to Christians stating, “We will destroy you and destroy Egypt, and we will blow ourselves up in crowded areas, and burn Christians alive.”

The declaration of war resulted in numerous terrorist attacks nationwide, especially against Shia’a, Copts, secularists, military and police and these are only few examples:

– On the same day of the announcement of jihad, a Coptic priest was killed, 16 Christian homes were torched, a Coptic businessman Magdi Lamie, was abducted, brutally tortured and his beheaded corps was discovered this morning in Sheikh Zayyed, and numerous churches and Coptic owned businesses nation wide were attacked, especially in northern Sinai.

– It’s highly likely that northern Sinai turns into a Taliban style region that harbors MB’s militia, Al-Nour Salafist Party militants, Al-Gama’a al-Islamiyya, Al Takfir wa’l-hijra, Galgalat Palestinian terrorist group, Hamas, and al-Qaeda that started a war to gain control in Sinai through systematic attacks against Egyptian armed forces, attempting to take control of Arish city governorate building, a failed attempted to bomb Arish Airport though terrorists that arrived on the same day from Afghanistan and Yemen; which resulted in the army shutdown of the Rafah crossing.

– An attack on a pipeline in Sinai providing gas to Jordan exploded, returning Sinai to the previous mode of operation where ten gas line explosions took place prior to the MB seizure of power, that miraculously disappeared under Morsi’s rule; who opened the crossing for a year, where tens of thousands of jihadists established their Emirate under his rule. Fifty thousand  jihadists attempted to enter Sinai through the Rafah crossing, only two days prior to June 30th when millions took the streets to overthrow Morsi. The closing of Rafah crossing was probably the reason for gas pipeline attack.

The MB leader and former MP, Mohammed Beltagy implicitly claimed the MB’s responsibility for the terrorist attacks in Sinai stating, “What is happening in Sinai will stop the second Abdel Fattah Al-Sisi retreats back and reinstalls the president Morsi.”

– Another proof of the MB organized mass violence was that two days before the latest terrorist attack against Egyptian Republican Guard (RG), which left 51 people dead, a caller named Ahmed, who refused to disclose his identity tipped Tahrir TV that there was a terrorist attack being plotted against a national vital government facility in the MB controlled Rabaa al-Adawiya mosque in Cairo led by the infamous terrorist Safwat Hegazy.

On June 8th armed jihadis attacked the residential buildings across the streets from the RG setting apartments on fire to distract the residences from turning their roofs into a firing points against the RG as seen in the video here. Which clearly shows they were not protestors holding signs but armed terrorists attacking a vital security facility. The attack against the RG is equivalent to an attack against the U.S. secret services.

The MB were always going to be in panic mode, given their knowledge that it is illegal for an escaped prisoner to run for office, let alone be in office. But more importantly, they were shocked by the fact that in 80 years they were only able to recruit from 600 thousand official members, yet the secularist movement Tamarod, “Rebellion” that was established in early May 2013 was gathered 22 million signatures that oppose “Morsi, the MB, and Islamic theocracy” in just sixty days!

Which explains why the MB announced war on the same day Rebellion movement along with over 30 million Egyptians went out in one of the largest protest in history against Islamists; to which the MB announced mass “Nafir,” literal translates to ‘mass flight’, but the only modern usage of the word is in the context of Islamist war theology meaning, mass indiscriminate carnage, while Jihad might be target towards certain groups, Nafir is the announcement of the obligatory participation of every member in a jihadist group to participate in mass indiscriminate slaughter in the nation they declare Nafir against.