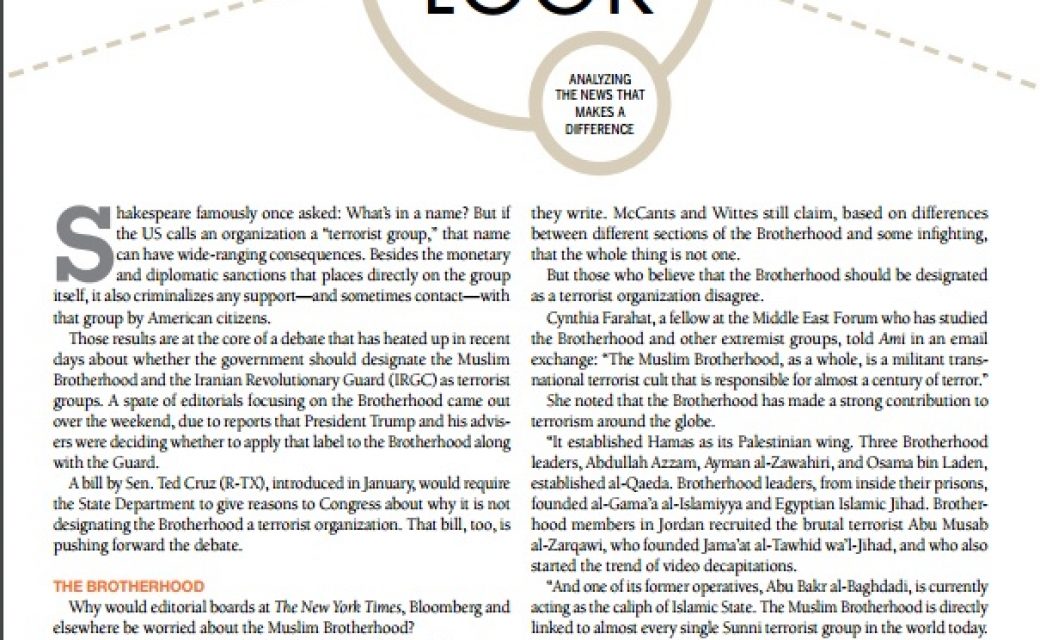 Shakespeare famously once asked: What’s in a name? But if the US calls an organization a “terrorist group,” that name can have wide-ranging consequences. Besides the monetary and diplomatic sanctions that places directly on the group itself, it also criminalizes any support—and sometimes contact—with that group by American citizens.

Those results are at the core of a debate that has heated up in recent days about whether the government should designate the Muslim Brotherhood and the Iranian Revolutionary Guard (IRGC) as terrorist groups. A spate of editorials focusing on the Brotherhood came out over the weekend, due to reports that President Trump and his advisers were deciding whether to apply that label to the Brotherhood along with the Guard. A bill by Sen. Ted Cruz (R-TX), introduced in January, would require the State Department to give reasons to Congress about why it is not designating the Brotherhood a terrorist organization. That bill, too, is pushing forward the debate.

Why would editorial boards at The New York Times, Bloomberg and elsewhere be worried about the Muslim Brotherhood? The arguments against the designation come in several flavors. Some have argued that the Muslim Brotherhood, as a whole, simply doesn’t qualify as a terrorist organization, because the group, founded almost a century ago in Egypt, is now really a loosely affiliated group of organizations, some of which—like Hamas—are terrorist groups, and some of which are not. In an article on Lawfare, Will McCants and Ben Wittes write that designating the Brotherhood a terrorist organization would be illegal because its constituent parts haven’t all been shown to be ordering terrorist attacks.

But even they admit that it is unclear how the Brotherhood’s organizational chart really works. “It is difficult to assess the strength of the ties between the international organization and the various Brotherhood chapters, because of the organization’s penchant for secrecy,” they write. McCants and Wittes still claim, based on differences between different sections of the Brotherhood and some infighting, that the whole thing is not one.

But those who believe that the Brotherhood should be designated as a terrorist organization disagree. Cynthia Farahat, a fellow at the Middle East Forum who has studied the Brotherhood and other extremist groups, told Ami in an email exchange: “The Muslim Brotherhood, as a whole, is a militant transnational terrorist cult that is responsible for almost a century of terror.” She noted that the Brotherhood has made a strong contribution to terrorism around the globe.

“It established Hamas as its Palestinian wing. Three Brotherhood leaders, Abdullah Azzam, Ayman al-Zawahiri, and Osama bin Laden, established al-Qaeda. Brotherhood leaders, from inside their prisons, founded al-Gama’a al-Islamiyya and Egyptian Islamic Jihad. Brotherhood members in Jordan recruited the brutal terrorist Abu Musab al-Zarqawi, who founded Jama’at al-Tawhid wa’l-Jihad, and who also started the trend of video decapitations. “And one of its former operatives, Abu Bakr al-Baghdadi, is currently acting as the caliph of Islamic State. The Muslim Brotherhood is directly linked to almost every single Sunni terrorist group in the world today. “Now, we have ISIS and al-Qaeda, Ansar el-Sharia and others; tomorrow we will have new groups and it will continue, until their Brotherhood parent organization is stopped.”

Some have argued that the connection of various political groups around the world would be a problem. The AKP, the ruling party in Turkey, has supported the Muslim Brotherhood; one of the parties in the governing coalition in Tunisia is actually a Brotherhood group. But The New York Times and several other outlets have especially focused on the argument that designating the Brotherhood as terrorists would alienate Muslims around the world and would be seen, in the words of the Times, as an indication that the Trump administration is “intent on going after not just terrorists but Islam itself.”

Proponents have said that the idea that the Muslim Brotherhood is seen as “Islam itself” is ridiculous, particularly since several Muslim-majority countries already have labeled the Brotherhood as a terrorist group. Ms. Farahat said that the idea that the designation would increase terrorist recruitment is invalid. “On one hand, the advocates on behalf of the Muslim Brotherhood claim that it’s peaceful; and on the other hand, they claim that its members might engage in terrorism. They can’t have it both ways.” She said that designating the Brotherhood as terrorists will have immediate positive effects. The funneling of funds from the US to terrorist groups across the Middle East would be curtailed. She noted that the Holy Land Foundation trial in 2009 showed that $12 million had gone from operatives in the US to Hamas. There could be much more money going to parts of the Brotherhood that have not yet been designated terrorists.

She said that it would have effects inside the US, as well. “Moderate Muslims in America are deeply marginalized by the Muslim Brotherhood affiliates that control major mosques around the country, and major Muslim civil society groups. This opens the door for Muslims to be encouraged to engage freely in civil society, without being attacked and harassed and intimidated by the Brotherhood. Muslim leaders discreetly communicated with me that they are suffering by the hands of the Muslim Brotherhood in America. I was told that the Brotherhood operatives went as far as physically attacking and assaulting their Muslim critics in mosques in NYC, Texas and Virginia.” She noted that the Brotherhood has planned to infiltrate the armies, governments, educational systems and intelligence agencies of Western countries, according to a Brotherhood document that was used as evidence in the Holy Land case. She also stated that such a designation would keep Brotherhoodaffiliated groups from influencing US Congress members. (CAIR, the Council on American-Islamic Relations, which does lobby lawmakers, has been accused for years of being affiliated with the Muslim Brotherhood, and was designated a terrorist group by the United Arab Emirates in 2014.) “The myth that these groups are non-violent,” Farahad said, “is dangerous and deeply offensive to their tens of thousands of innocent victims.”

The question of the Iranian Revolutionary Guard Corps is a different one, because Iran has already been designated as a state sponsor of terrorism for its propping up of groups around the world—while it has also carried out its own direct activities everywhere from Iraq to Washington, DC. The coordination of that terrorism is most often carried out by units of the IRGC, particularly the Quds Force, headed by Major General Qasem Soleimani, which is responsible for extraterritorial action. The US government designated the Quds Force a supporter of terrorism in 2007; Canada designated it a terrorist group in 2012.

But the problems that critics have raised about designating the Guard as a whole are that they would impact the US relationship with Iran too heavily. The Guard functions, in effect, as the Iranian military, and designating a country’s military as a terrorist group would be unprecedented.

Furthermore, the IRGC controls numerous Iranian businesses and an estimated 20 to 40 percent of the Iranian economy. While many types of business dealings with the Revolutionary Guard are already prohibited by US law, a terrorist-organization designation would entirely restrict dealings with the over-200 IRGC-owned companies. But such problems are only problematic if, like the Obama administration, the Trump White House wants to have friendly ties with Iran. For those who see that relationship in less positive terms, designating the Guard as terrorists makes sense.

As Cynthia Farahat noted: “Maybe if they don’t want to be designated as a terrorist group, they should stop operating as one.”