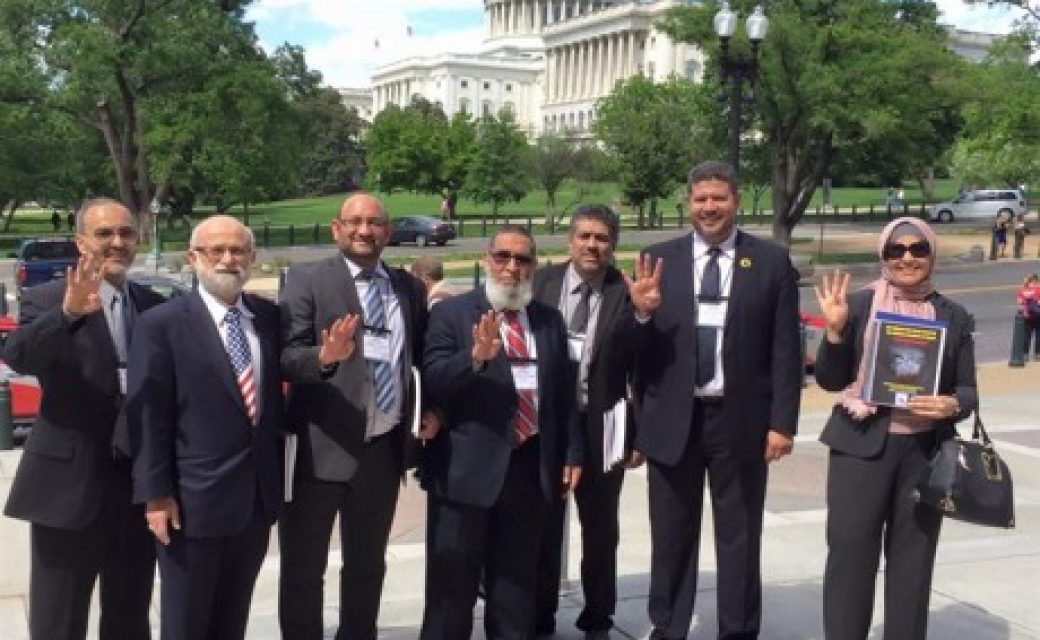 An innocent-sounding New Jersey-based organization called Egyptian Americans For Freedom And Justice (EAFAJ) made the rounds on Capitol Hill May 4 to urge U.S. lawmakers not to support designation of the Muslim Brotherhood as a terrorist organization.  The visit, which came hours after the Muslim Brotherhood-linked Hasm terrorist organization claimed responsibly for a deadly attack on a security convoy in Cairo, wasn’t the first time radical Islamists have masqueraded as human rights activists when seeking to sway American minds and won’t be the last.

Although EAFAJ makes an effort to talk the talk of democracy and freedom, its unabashed support for armed jihadis wreaking havoc in Egypt is hard to miss.  At a November 2016 EAFAJ event, radical imam Mohamed Elbar declared that Egyptian President Abdel Fattah el-Sisi “ought to be beheaded.”

The EAFAJ delegation included several known New Jersey-based Islamic extremists.  EAFAJ chairman Hani ElKadi, for example, helped promote  a February 2015 communiqué by the the Popular Resistance Movement (PRM),  which has carried out numerous terrorist attacks and police killings in Egypt.  EAFAJ board member and spokesman Mahmoud El-Sharkawy, who reportedly serves as the group’s liaison with Brotherhood members exiled in Turkey,  praised the terrorist Revolutionary Punishment Movement (RPM) for executing a police informant in Egypt.  Aber Mostafa once posted personal information about a soccer team owner sympathetic to President Sisi with the word “Attaaack!”

But the belle of the ball was New York-based activist Ayat Oraby, a favorite of the Brotherhood’s broadcast media outlets.

Oraby commonly refers to President Sisi as a “murtad,” meaning an apostate from Islam subject to punishment by death according to Sunni Islamic jurisprudence, and frequently calls for the terrorist attacks against the Egyptian army, which she calls “Mi-Israeli army” a derogatory term (playing off the Arabic term for “Egyptian,” misri) popular among Islamists. Last April she said that the execution of Egyptian soldiers in Sinai was “funny, comical, and amusing” and condemned the military for “killing Muslims on behalf of the Zionist enemy.” Discussing a video of the execution of Egyptian soldiers, she said laughing, “militants were catching them like flies.”

Oraby also frequently celebrates terrorist attacks against Jews in Israel. On her official Facebook page, she mourned the death of Palestinian terrorist Siham Nimr, who was killed last March while trying to stab Israeli police officers.

Oraby justifies Islamic State (ISIS) terrorism as well, albeit more indirectly, calling it the result of “democracy killing machines” (presumably Egypt’s Sisi and other Arab leaders) in an interview on the Brotherhood’s Mekameleen TV channel.

Perhaps Oraby’s favorite militant pastime is incitement to violence against Egypt’s long-persecuted Coptic Christian minority.  Last year, she launched a high-profile campaign calling on Egyptian Muslims to boycott Christian-owned businesses.  In a September 2016 video she called the Coptic church “a gang” and “full-fledged mafia,” while describing Coptic Pope Tawadros as a “criminal.”

Oraby claimed last November to have been questioned by the FBI about the content of her Facebook page, which isn’t surprising.

According to the Egyptian newspaper Youm el-Sabe members of the EAFAJ delegation visited 70 congressional offices and met with staffers at many, although several declined to receive them and it’s not clear that they received a personal audience with any representative or senator.

EAFAJ is not the only Muslim Brotherhood-linked organization lobbying congress.  Last April, the Council on American-Islamic Relations (CAIR), the unindicted co-conspirators in the largest terrorism funding case in U.S. history, announced that it arranged for 330 delegates from more than 28 states to meet with 225 elected officials and congressional staffers during a “record-breaking” second annual National Muslim Advocacy Day on Capitol Hill.

EAFAJ lacks CAIR’s savvy in pretending not to be Islamist – evident in the decision by members of the delegation to pose for a group photo in front of U.S. Capitol building while flashing the Muslim Brotherhood’s four-finger “rabia” sign and then post it online.  But expect the organization to learn quickly.

Although U.S. Congressional offices are in the habit of receiving most anyone who shows up in person, they should screen for and exclude representatives of EAFAJ, CAIR, and other Islamist organizations masquerading as civil rights defenders – the photos that will appear on their Facebook pages the next day only help them sell this ruse.

Cynthia Farahat is an author and fellow at the Middle East Forum.