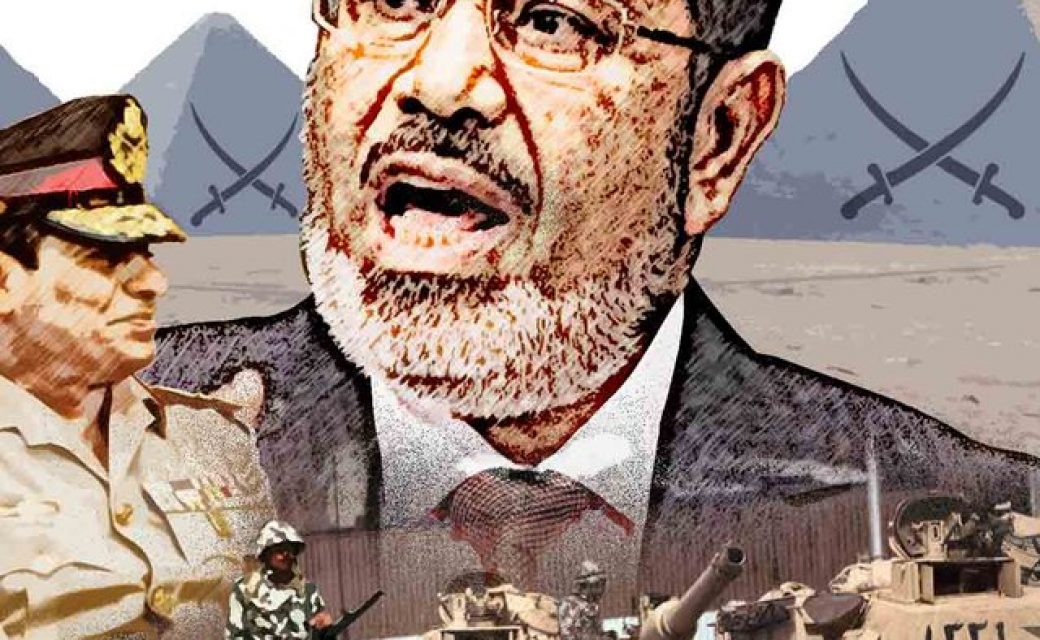 How did this happen?

Field Marshal Tantawi, then  the effective ruler of Egypt, had handpicked Mr. Morsi for president, seeing him as the  safest option, someone who could be manipulated or (if necessary) replaced.  Toward this end, Field Marshal Tantawi instructed the Supreme  Constitutional Court (SCC) to approve Mr.  Morsi as a candidate despite his arrest on Jan. 27, 2011, for “treason and  espionage,” despite his time in prison, and despite the SCC  having excluded other imprisoned Muslim  Brotherhood candidates, especially the rich, charismatic and visionary  Khairat El-Shater. Field Marshal Tantawi wanted the obscure,  inelegant and epileptic Mr. Morsi to run  for president because Mr. Shater was too dangerous  and another Muslim Brotherhood  candidate, Abdel Moneim Aboul  Fettouh, was too popular.

Sometime after Mr. Morsi became  president on June 30, Field Marshal Tantawi openly signaled his intent  to overthrow him via a mass demonstration to take place on Aug. 24. His  mouthpiece, Tawfik Okasha, openly  encouraged a military coup against Mr.  Morsi. But Mr. Morsi acted first and  took several steps on Aug. 12: He annulled the constitutional declaration  limiting his power, dismissed Field Marshal Tantawi  and replaced him with Abdel Fattah  al-Sissi, head of military intelligence.]

Mr. Morsi, in brief, pre-empted the  impending military coup d’etat against him. Tarek al-Zomor, a leading jihadi and Morsi  supporter, admitted that “choosing Sissi to replace Tantawi  was to stop a coup,” publicly acknowledging Mr.  Morsi’s urgent need to act before Aug. 24. Hamdi Kandil, one of Egypt’s most prominent journalists, rightly  characterized Mr. Morsi’s act as “a  civilian coup.”

How did Mr. Morsi pull it off? How did  the lamb slaughter the butcher? Why did so many analysts not see this  coming?

They missed one hidden factor: Muslim  Brotherhood-oriented military officers turn out to have been far more  numerous and powerful than previously realized. They knew about the Aug. 24 plot  and helped Mr. Morsi beat it. If it was  long apparent that some officers had a sympathetic outlook toward the Brotherhood,  the extent of their network has only just come out in the three months since the  coup.

For example, we now know that Maj. Gen. Abbas Mekheimar, the army officer  assigned to oversee the purge of officers with Muslim  Brotherhood or other Islamist affiliations, himself is aligned with the Muslim Brotherhood or perhaps a member of  it. As for Mr. Sissi, while the Muslim Brotherhood denies his direct  membership, one of its leaders says he belongs to its informal “family” — which  makes sense, seeing that high-ranking public figures best advance its agenda  when not formal members. His position as head of military intelligence gave him access  to information about Field Marshal Tantawi’s planned Aug. 24 coup.  Historian Ali Al-Ashmawi found that Mr.  Sissi tracked military officials loyal to Field Marshal Tantawi  and had them discharged.

In retrospect, this network should not be a great surprise, for it has a  precedent: The Muslim Brotherhood  infiltrated the military in the 1940s, standing behind the Free Officers  movement that overthrew King Farouq in 1952. After having been shut out in the  period 1954 through 1974, the Muslim  Brotherhood then rebuilt its network of officers in ways invisible and  unknown to outside observers, including ourselves. One top Muslim  Brotherhood figure, Tharwat al-Kharabawi, now acknowledges that some of the  organization’s members “became high-ranking leaders in the military.”

Where does this leave matters? Field Marshal Tantawi  and company are safely pensioned off, and (unlike Hosni Mubarak)  are not going to jail. Mr. Sissi’s  military has retreated to roughly the same position that Field Marshal Tantawi’s  military occupied before Mr. Mubarak’s  overthrow in February 2011 — which is to say it is allied with the president and  following his leadership without being fully subordinate to him. It retains  control over its own budget, its promotions and dismissals, and its economic  empire. But the military leadership lost the direct political power that it  enjoyed in 2011-12.

Mr. Morsi’s future is far from assured.  Not only does he face competing factions of Islamists, but Egypt  faces a terrible economic crisis. Mr.  Morsi’s power today unquestionably brings major short-term benefits for him  and the Muslim Brotherhood, but in the  long term, it likely will discredit the organization’s rule.

Daniel Pipes (DanielPipes.org) is president of the Middle East Forum,  where Cynthia Farahat is an associate fellow.