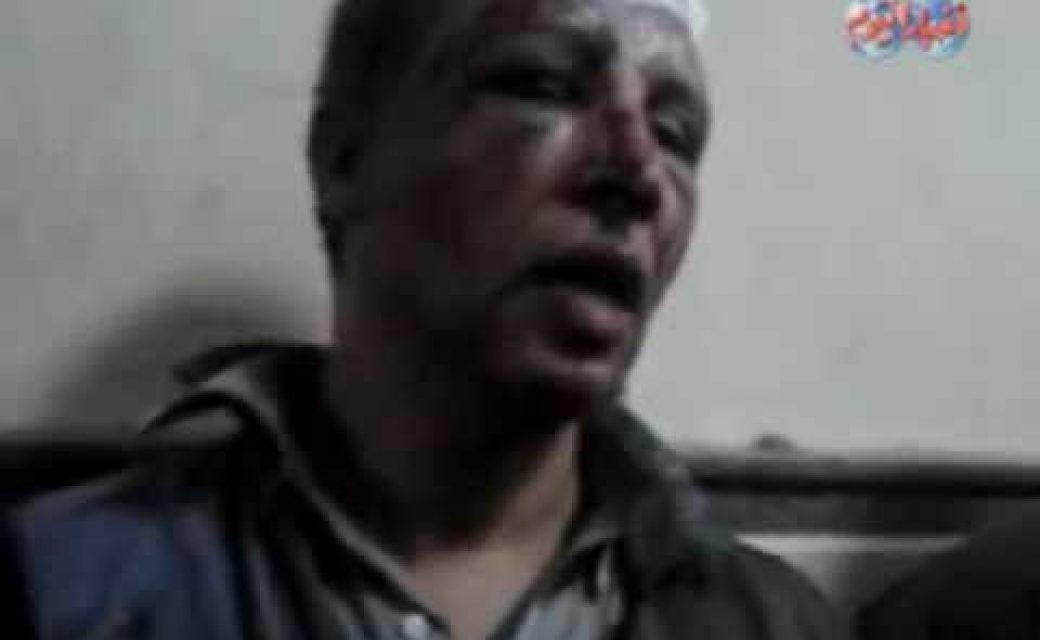 While America is still discussing Benghazi’s  9/11 terrorist attack and questioning whether Ambassador Chris Stevens and the four America heroes were killed by U.S. supplied arms to Libyan jihadists or not; it happens yet again! The founding fathers of al-Qaeda, the Muslim Brotherhood (MB) militants introduces the second act of the familiar horror in Cairo. But unlike Ambassador Stevens, Ambassador Najm lived against the dismay of the MB to speak the truth after he survived the horror.

The MB militia which is currently supported, funded and armed by the current U.S. administration, abducted the former Egyptian Ambassador to Venezuela Mr. Yehyia Najm, while he was peacefully protesting against Mohammed Morsi’s constitution and the Muslim Brotherhood’s rule last Wednesday. Mr. Najm who was exiled in Venezuela under Mubarak’s regime from 2005 to 2011 because of his opposition to Mubarak’s dictatorship, came back to a worse version of the same.

These are videos of Mr. Najm’s testimony in Arabic, and this is my translation of parts of his testimony from the time he went to the protest on Tuesday, to his abduction, torture, and imprisonment until he was finally released yesterday. The first video taken shortly after he was arrested and the second is his interview on Haya TV yesterday:

“I went out to march in protest to Itihadiya (presidential palace), and it was a peaceful protest, 100% peaceful from its beginning to its end, some protesters stayed in a strike in front of Itihadiya, but I left at 12 am. The next day when I was reading the news, I heard the MB will send its followers to Itihadiya, I knew it was bad news, and that it was dangerous. I decided to go join protestors peacefully.”

“As I started getting closer the Muslim Brotherhood started using tear gas against protestors, and I was surprised that they had (access to) tear gas, and using it against people including women and girls, so we started running in panic as we heard gun shots, and they shot at me… their ammunition almost hit me. I knew then, that it was bigger than just a protest and bigger than just expressing our opinion. They are using weaponry.”

“They started abducting anyone they can catch, I saw them drag a protestor randomly as they brutally beat him, I think they killed him… The MB had metal shields, but the protestors were unarmed and had nothing to protect themselves. I was later taken to an onsite hospital (established by protestors) and a doctor saw my injury and said it was mild. While I was walking with my friends among them were women, we got closer to the palace and we saw rocks flying from all directions, we hid behind a metal shield; but they attacked me and started violently beating me, there were tens of them, they stood with their shoes on my head and my chest and kept jumping crushing my chest like they were jumping on a trampoline, while calling me an agent of the U.S. and an enemy of Allah; all we want is freedom and rights, constitutional rights.”

“They almost killed me, until one of them sympathized with me and asked them to have mercy, but they continued and they sprayed pesticides in my eyes. While this was going on, an ambulance came that wanted to take me and the MB prohibited them… they dragged me a 100 meters in the street to the fence of the presidential palace with my hands and feet tied as I bled, there were others tied and bleeding with stab wounds, including a pharmacists who was lying next to me, with a stab wound across his chest.”

“They kept throwing bodies at us; it was like a Nazi concentration camp, until there were 49 of us, with our hands and legs tied like hostages. A doctor came at dawn, he just to put antiseptic on some of the people’s wounds, but others needed sutures and blood transfusion, and the doctor kept begging them to send us to a hospital and they refused. There was a 14-year-old child with stab wounds, there was another man whom they attempted to mutilate his hand.”

“The doctor left, and came another, I asked him to help me, but the doctor said: “No, the supreme guide of the Muslim Brotherhood ordered us not to nurse you.” Another doctor came, she was a woman, she kept kicking me and telling me: “You Zionist, you agent,” and the usual accusations, as she took pictures of our faces while threatening us until a guard came out of the palace and asked her to treat us with some humanity… yet they continued to insult, photograph and intimidate us.”

“We were abducted and tortured by the Muslim Brotherhood, and this is my testimony before God… In the morning some policemen came, a small group of 20-30 young officers that were getting their orders form the Muslim Brotherhood leadership that was present at the site, while the MB continued to arrest and interrogate us, the MB interrogators were getting directly out of the presidential palace, as they continued to assault us and randomly abduct people passing by in street, including a bus driver who stopped his bus to see what is going on.”

Mr. Najm goes on to describe how the MB had preplanned to frame protestors:

“This continued for 16 hours until a deportation cart took us as we bled without any medical aid until they took us to the police station, for interrogation as the President gave his speech saying that we have “confessed to our crimes” and that they found with us explosives and weapons, which is not true, they already had a box on the site from (Wednesday) morning in front of the gate of the presidential palace, and it had weapons, or, iron rods, and to our surprise this box included Bibles! It’s laughable! An antique gun, and bibles!”

“I was later deported to the Central Security Forces prison, they put me in a prison cell, where I spent the night on the floor with a blanket on Thursday, until we were released at dawn on Saturday, today.”

Khalid Abo Bakr, an International lawyer called the show on Haya TV told Mr. Najm: “We are proud of you Mr. Najm, your wounds are a testimony to what is happening. Mr. President, Najm is now reporting a crime where he accused the supreme guide of the Muslim Brotherhood with attempted murder… You must allow the prosecution authority to interrogate the supreme guide… my message to the judges of Egypt and the general prosecutor, investigate and prosecute all those involved in these crimes, even if it was the president.”

But this was a success survivor story probably because Mr. Najm is a diplomat… the rest of the men, women and children protesting for clear demands of political and constitutional freedom that were abducted and tortured and / or killed and have no way to speak out. As President Obama will send the Muslim Brotherhood “more battle tanks and jet fighters from the United States” to continue the slaughter on a larger scale.