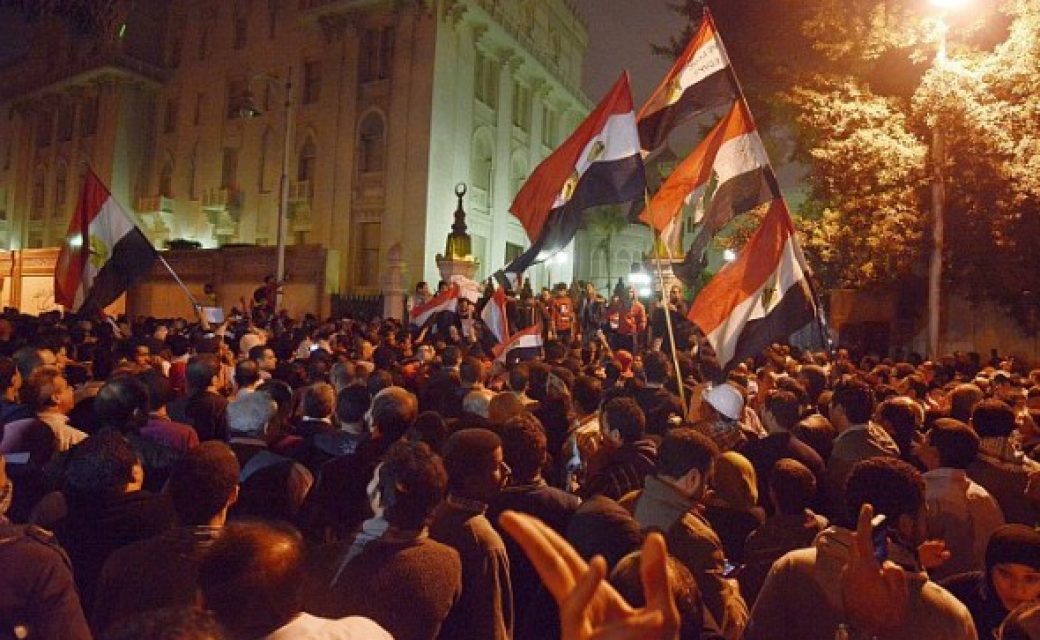 Interview with Epoch Times on December 11, 2012

Egyptian protesters gather outside of the presidential palace in Cairo on Dec. 4. While American media coverage of Arab Spring protests was thorough, Egyptian activists say the truth of widespread protest and violence under President Morsi is barely acknowledged. (Gianluigi Guercia/AFP/Getty Images)

WASHINGTON—Egypt’s liberal Arab Spring veterans are disappointed at what they are calling American media’s unaggressive coverage of last week’s protests that turned violent and deadly.

As Facebook newsfeeds and YouTube channels are filled with images of anti-government protesters covered in blood, activists complain that the U.S. media and government seem largely unmoved by their plight. The activists say American media and officials barely acknowledge the beating, abduction, and killing of liberal Egyptians in a return of Mubarak-style violent politics.

“I expect the Western press to report the events and the surrounding narrative as if it were happening in the West, not with a logic that assumes that ‘things are different in the Middle East,’” said Aly, one of the founders of a Facebook page dedicated to the issue titled Bring the Noise Egyptian Revolution 2.0, in a Facebook chat. Aly is an MIT graduate currently protesting in Cairo.

Abu Deif is now hospitalized and in critical condition, according the Egypt Independent.

Egyptian dissident and associate fellow at the Philadelphia-based Middle East Forum Cynthia Farahat spoke at a rally in front of the White House in Washington, D.C., on Saturday.

“Mainstream media has not been reporting the truth—not reporting that there are millions of people in the street, not hundreds, protesting against Morsi,” Farahat said.

Over the past few days, Bring the Noise has posted photos of wounded anti-Morsi protesters. Volunteers have hurried to translate information coming out of Egypt into English to get it to the American public.

Among those photographed was an Orange Telecom engineer and manager, Mina Philip—Morsi supporters are pressing a plank to his neck, strangling him. Another photo shows Abu Hamed, former member of the Egyptian Parliament, laying bloody and beaten in a hospital bed. Another shows a badly beaten, but still smiling, Ambassador Yahya Najm, the 2004 Egyptian ambassador to Venezuela.

“I don’t think that is adequately described by ‘clashes erupted,’” Aly said.

Janet Elia Mardow, a 32-year-old graduate from the University of the District of Columbia, is in Cairo. She told The Epoch Times via an online chat that during the protests, “the Muslim Brotherhood were using all kinds of weapons and brutality” and they “caused many casualties among the protesters.”

According to Mardow, a field hospital had been set up in a church behind the presidential palace, the main gathering ground for the opposition. “I was in the field hospital, I witnessed the first-aid injuries,” said Mardow.

There are millions of people in the street, not hundreds, protesting against Morsi.

Ramy Salem, a photographer who participated in the protests in front of the presidential palace, described the scene in an online chat with The Epoch Times.

On Dec. 5, the most violent day of the protests, on El Khalifa el Mamoun, a street leading to the presidential palace, “The police were covering the Muslim Brotherhood militias and giving them more ground with two armed trucks firing tear gas on the protesters,” Salem said.

The protest Salem participated in at the presidential palace left five dead and more than 750 injured, according to the Arabic-language publication Youm7. Egyptian media outlet Albedaiah reported that 154 protesters were detained. Three more protesters are said to have died later in hospital.

Muslim Brotherhood attackers are referred to as “militia” by opposition protesters due to their preparedness and organized assaults.

“They were marching in large numbers in organized lines, seen heading to the sit-in. Lots of young people ran to go there to fend off another potential attack,” said an an attendee who did not wish to be named, about last Friday’s protests when alleged Muslim Brotherhood militia attempted another attack on Morsi opposition protesters in front of the Presidential palace. “Then [the] Muslim Brotherhood called it off and just issued a few threats here and there.”

Mardow said she could identify the militia forces as Muslim Brotherhood members by their clothes and the way they spoke.

“If it marches, beats, shoots, tortures, interrogates like a militia, it is probably not a duck,” Aly said.

With the Egyptian youth’s painful struggle against Mubarak and the military, quickly replaced by Muslim Brotherhood oppression, “the stakes are high and media coverage is critical,” said Aly.

Middle East Forum’s Farahat said, “[American media outlets have] not reported that the Muslim Brotherhood is abducting people and have turned mosques into torture cells in my neighborhood in Cairo.”

As opposed to the January 25th Revolution, during this second wave, “main stream media has not represented what is going in Egypt,” says Farahat. “Go talk to Egyptian protesters. Don’t take the government’s talking points about Egyptian protesters.”

The Epoch Times publishes in 35 countries and in 19 languages.