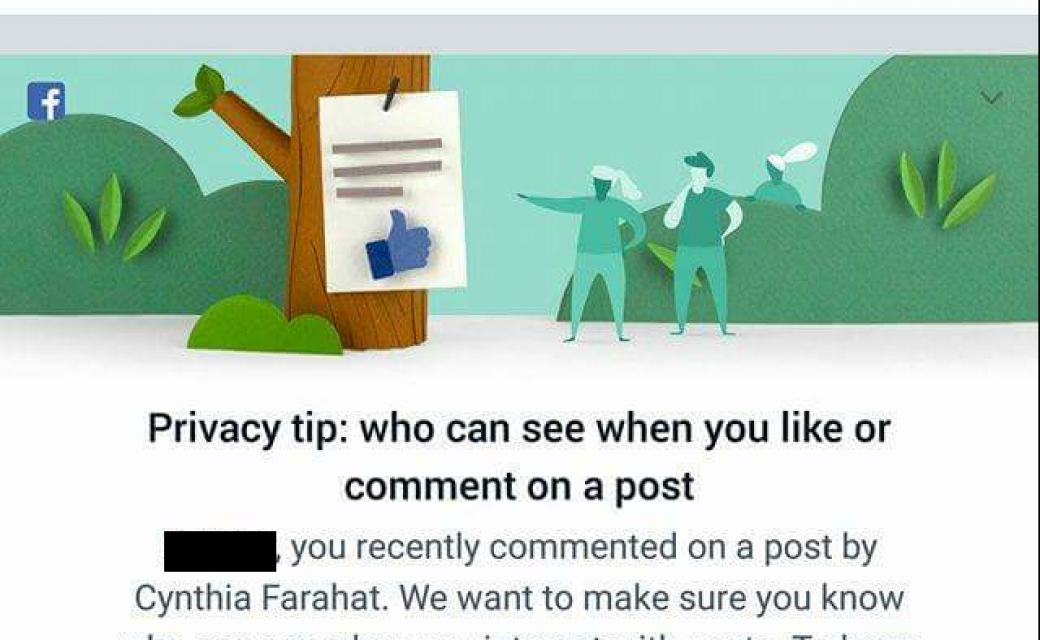 Facebook is one of the major social media outlets used by the Islamic State (IS, ISIS, ISIL, Daesh) to recruit terrorists, yet the Facebook team has been busy attempting to isolate and target conservatives and free speech advocates.

Last night, a Facebook user on my Cynthia Farahat Official Facebook Fan Page, sent me a private message stating that

moments after commenting on one of my posts, she received a Facebook notification with this message: “Privacy tip: who can see when you like or comment on a post. You recently commented on a post by Cynthia Farahat. We want to make sure you know who can see you interact with posts. To learn more, check out Privacy Basics.”

A month ago, I reported a terrorist recruitment propaganda page to Facebook, only to receive this message: “We reviewed the Page you reported for having a credible threat of violence and found it doesn’t violate our Community Standards.” The Facebook page I reported is very dangerous and it alleges that it is personally managed by Abdul Rahman al-Sudais, the leading imam of the Grand Mosque in the Islamic city of Mecca, Saudi Arabia. This Wahhabi terror preacher was previously barred from entering the United States and Canada for incitement to annihilate Jews, Christians and Hindus, and he is infamous for calling Jews “pigs and monkeys.”

This Facebook page calls daily for the murder of Jews, Christians, Buddhists, and atheists.  It also hosts regular competitions and awards winners with prizes, such as cell phones, washing machines, and trips to the Hajj. These prizes are awarded to people who most frequently share their jihad propaganda posts and pictures on Facebook.

This is only one example of the numerous terrorism pages I have reported to Facebook over the years. Facebook has never taken action against the sites I reported, yet Facebook is attempting to isolate me as part of their soft political purge of conservative or Objectivist viewpoints.

Last September, former Facebook workers admitted that they routinely suppressed news stories of interest to conservative readers from the social network’s influential “trending” news section. This dangerous trend is part of a larger attack on conservatives on the Internet.

Less than a month ago, the second-largest mobile telecommunications provider in the United Kingdom banned Dr. Daniel Pipes’ website. It was done in a manner that would show that the website was restricted only to those under 18 years of age, but in fact, everyone using O2, was not be allowed to visit the website without entering their credit card information. Thankfully, O2 corrected this restriction.

The individually who informed me that my they received the “Facebook warning,” on my page, also told me that the same incident occurred with people engaging with Objectivist cartoonist Bosch Fawstin.

I hope Facebook realizes the huge breach of freedom of speech in which it is engaging and how this behavior can significantly affect their business model, given the fact that approximately half the population of the United States holds conservative values.

Hopefully, instead of harassing those who express conservative or Objectivist views on their Facebook pages, Facebook should start giving some attention to al-Qaeda, Islamic State, Hamas, and al-Nusra Front operatives.  These operatives freely manage vast recruitment centers for terrorism on Facebook, like the one I reported.  Facebook needs to understand that the enemies of Western civilization are radical terrorists and not American conservative or Objectivist values. I have contacted Facebook for an explanation, and I am waiting for them to get back to me.