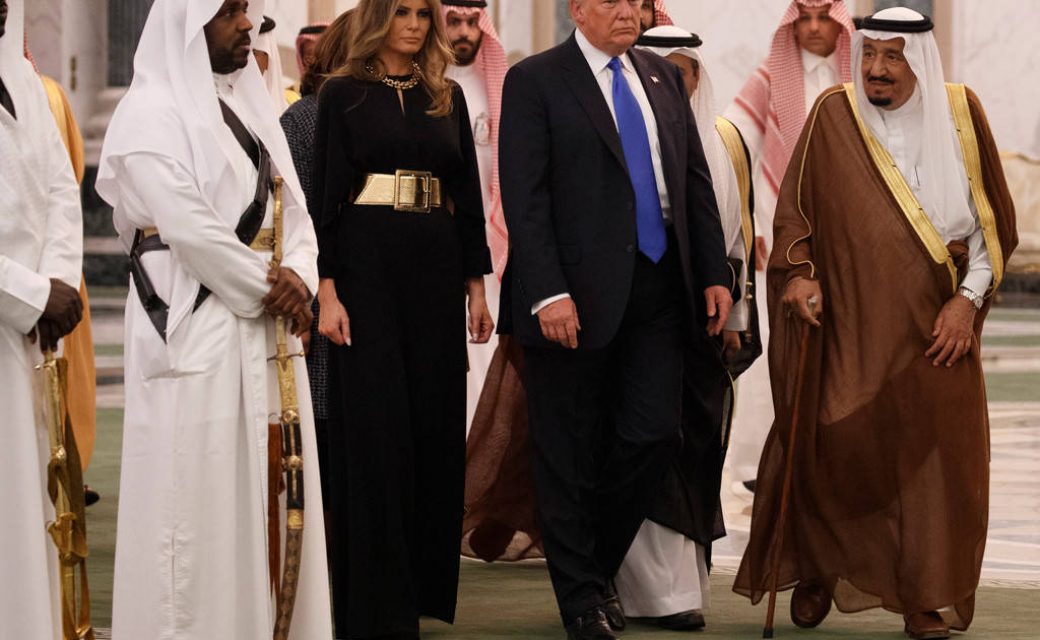 President Trump’s address in Riyadh reminded us of the joy of having a U.S. president who doesn’t apologize for American values, in stark to President Obama 2009 surrender speech in Cairo. But there were serious problems with the visit itself.

First, Trump continued the tradition of past U.S. presidents of allowing the Saudi King to put chains around their necks.  The King Abdulaziz al-Saud Medal bestowed on President Trump is a second class civilian medal.  The first-class medal is the Great Chain of Badr, named after the prophet of Islam’s successful battle of Badr in 624 A.D., which is only given to Muslims.

Putting chains around the neck of non-Muslims is a deeply humiliating gesture in Arab-Islamic culture.  Sunni Islamic theology and history is replete with references to putting chains on non-Muslims.  To this day, Coptic Christians in Egypt are demeaned by Muslims as “blue bones,” a derogatory term that dates back to when early Islamic invaders forced non-Muslims to wear heavy chains around their necks. The chains left bruises, thus coining the term “blue bone.”

When an American president bows his head and allows the Saudi king to dress him with a chain that has the King’s name on it, this symbolizes the president’s acceptance of his status as an inferior, submissive dhimmi.

Second, President Trump was overly cozy with his host, King Salman, a tyrant named  by the New York Times as having been directly involved in financing terrorism in Pakistan and Bosnia.  Awkwardly bouncing around with Salman and others in a traditional Saudi “sword dance” sent the message of someone willing to do anything to win royal favor.

Third, the “royal favor,” so to speak – an estimated $300-400 billion in deals with U.S. companies, including $110 billion worth of defense purchases – is a mixed bag.   Deals like this not only strengthen the Saudi tyranny and help perpetuate its efforts to spread Sunni Islam’s most extreme doctrines throughout the Islamic world, but also increase Saudi leverage over the U.S.

Last year, the Saudis threatened to harm the U.S. economy if Congress overrode President Obama’s veto of bill that would have allowed terror victims to sue foreign governments. Eventually, Congress ignored the Saudi threat and overrode Obama’s veto, and the Saudis did nothing.

Worst of all is the opening of a new Global Center for Combating Extremist Ideology (GCCEI) in Riyadh. Establishing such a center a short drive away from Deera Square, where the Saudis plan to decapitate Ahmed el-Sharmi for being an atheist, is worse than a joke.  It is a betrayal of heroic Muslim reformists everywhere who are rotting in prison for blasphemy, in no small part due to the ultra-radical Wahhabi Islamist doctrine that the Saudi royal family spends billions of petrodollars disseminating throughout the Islamic world.

Although President Trump should be commended for the tough line he took on Iran in the speech, it isn’t necessary to appease one tyrannical theocracy in the course of defeating the other.

I still hope to someday see an American president takes the podium in Riyadh and say something along the lines of what President James Madison said about demands for protection money from the Barbary pirates in the early nineteenth century: “It is a settled policy of America, that as peace is better than war, war is better than tribute. The United States, while they wish for war with no nation, will buy peace with none.”