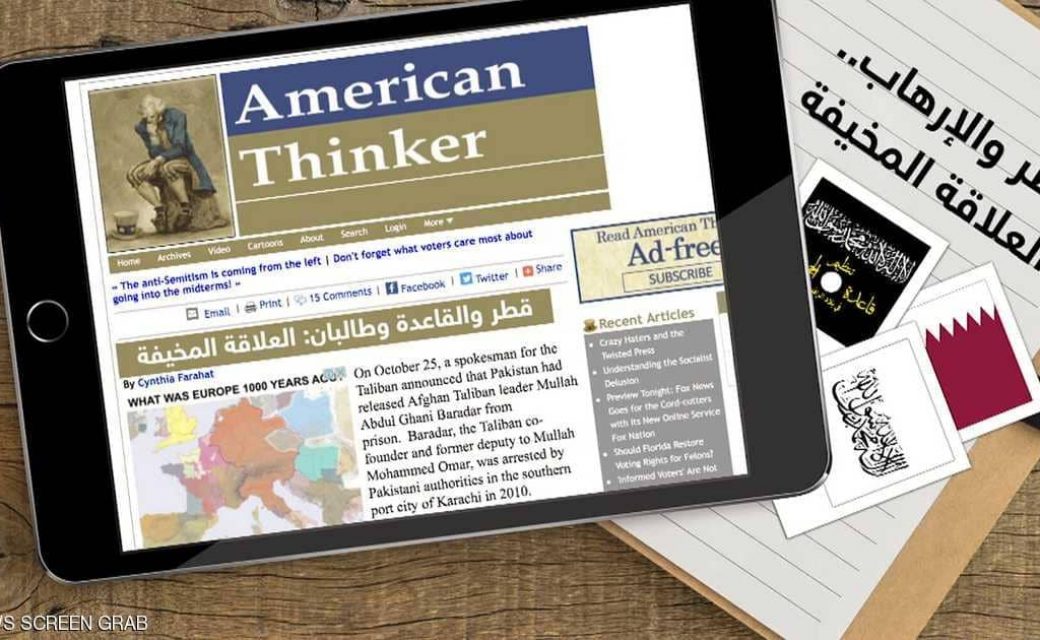 After publishing this article in the American Thinker, it has been extensively researched and covered in numerous mainstream Television stations and newspapers in Egypt, Iraq, Saudi Arabia, Yemen, Kuwait, United Arab Emirates, Jordan, and Mauritania.

Middle East counterterrorism efforts have been significantly threatened the past week.

In October 25, a spokesman for the Taliban announced that Pakistan had released Afghan Taliban leader Mullah Abdul Ghani Baradar from prison. Baradar, the Taliban co-founder and former deputy to Mullah Mohammed Omar, was arrested by Pakistani authorities in the southern port city of Karachi, in 2010.

According to Aljazeera, Pakistani authorities released Baradar at the request of the State of Qatar. Aljazeera reported that the “Taliban confirmed that they had held talks with US Representative for Afghanistan Reconciliation Zalmay Khalilzad in Doha, the capital of Qatar.” In 2013, the Taliban political office was setup in Doha at the request of the US to facilitate “peace talks.”

Two years after the Taliban office was established in Qatar, the head of al-Qaeda Ayman el-Zawahirigave bay`a (Islamic oath of allegiance) to Taliban Leader Mullah Akhtar Mohammad Mansour. Mansour was killedin 2016 by a U.S. drone strike in Southwest Pakistan and following his death,  al-Zawahiri renewed his oath of allegianceto Taliban’s current chief, Hibatullah Akhundzada. In Islamic theology, the oath of allegiance is given to a sole leader or Caliph, so Al-Zawahiri’s oath to the Taliban means al-Qaeda is now officially working under the guidance of the Taliban.

When Baradar was arrested, Bruce O. Riedel, a former C.I.A. officer who led the Obama administration’s Afghanistan and Pakistan policy review in 2010 said, “his capture could cripple the Taliban’s military operations, at least in the short term.” Afghani political analyst Habib Hakimi also statedat the time that Baradar’s arrest was, “a loss for the movement, both militarily and politically,” because Baradar, “has close ties to political circles and many Islamic movements within the region, especially within the territory of Pakistan.”

The question is—why wouldAmbassador Khalilzadand Qatar mediate the release of one of the most dangerous operatives of the Taliban, a group that is currently directing al-Qaeda?

The release of Baradar will have dangerous repercussions. Appeasing terrorists has never worked and only serves to bolster their activities. Afghani President Ashraf Ghaniand his Qataricounterparts have long worked to legitimize the Taliban.

Last March, retired DEA supervisory special agent and the former DEA assistant country attaché in the Kabul, Jeffrey Higgins warnedagainst appeasing the Taliban under the banner of peace talks stating, “the Taliban are not substantially different from other Islamic terrorist organizations, so would the U.S. recognize a political party for ISIS or al-Qaeda?  Would the U.S. have allowed Osama bin Laden to become a member of the Afghan Parliament if he condemned terror?”

Current setbacks to the Muslim Brotherhood can be reversed by a strengthened Taliban and an energized al-Qaeda. The Brotherhood can use al-Qaeda as leverage to bargain with Arab regimes, to intimidate the Brotherhood’s opponents, and to revive jihadist sentiments that will aid the Brotherhood’s recruitment efforts. Moreover, the Taliban’s political office in Qatar could serve as a mediator between various terrorist factions, with whom Baradar previously collaborated. The Brotherhood-connectedregime in Qatar can also use its Taliban office to halt reformist attempts supported by Egypt and the United Arab Emirates.

As Higgins correctly noted, “neither the U.S. nor Afghanistan should negotiate with the Taliban, unless it is to accept the Taliban’s unconditional surrender or the defection of individual Taliban members. Instead of offering concessions, the U.S. should show strength and resolve in the face of unbridled evil.”