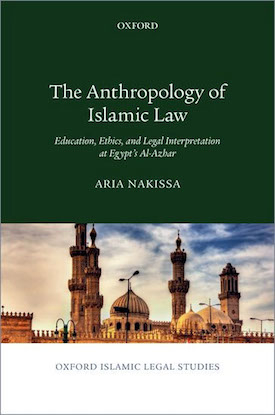 The Anthropology of Islamic Law

In The Anthropology of Islamic Law, Nakissa, assistant professor of Islamic studies and anthropology at Washington University, St. Louis, claims to use hermeneutic and practice theories to analyze the cultural, legal, and religious traditions of Islamic law. He focuses on higher Islamic learning in contemporary Egypt, drawing on more than two years of fieldwork at al-Azhar University, Cairo University’s Dar al-Ulum, and a network of traditional study circles associated with the al-Azhar mosque.

Nakissa explains that both hermeneutic and practice theories are concerned with the relationship between action and mind. Hermeneutic theory hypothesizes that actions reveal the mind, and practice theory posits that repeated action (i.e., practice) alters the mind. Nakissa then claims he gave “special attention to terms that have near or exact Arabic equivalents, and which are important to Islamic tradition,” such as mind (qalb), action (fi’l or amal), mental attribute (sifa al-qalb or wasf al-qalb), and disposition (malaka or khuluq). Nakissa proceeds to mistranslate one of these words, and this mistake, whether intentional or accidental, allows him to misrepresent Islamic law.

Qalb means heart in Arabic, not mind. This difference has significant theological implications. In his third chapter, Nakissa claims, “Qalb is sometimes translated as ‘heart,’ but this is misleading.” Actually, qalb is consistently translated as heart, and it is almost never translated as mind. By mistranslating qalb, Nakissa builds a significant portion of his arguments on incorrect definitions of the Islamic theological terms, sifa al-qalb or wasf al-qalb, which should be translated as attributes of heart or description of the heart.

The great Sunni theologian Abu Hamid al-Ghazali (1058-1111) was among the earliest theologians to use the term attributes of the heart. He writes,

the heart is the utility which allows readiness to [accept] knowledge; the heart knows God. It gets closer to God; it works for God; it seeks God; it foresees what is godly. But [other] organs are for services and utilities employed by the heart, which uses [it] as a master uses a slave, or as a shepherd uses a flock, or a manufacturer uses an instrument.[1]

This understanding of the heart is not only about its biological function as it was also believed to be a cognitive tool for the transfer of religious knowledge. The terms ifa al-aql or wasf al-aql should be correctly translated as attributes of the mind or mental attributes. This term is also present in Islamic theology and was used by early Shiite theologians and the Mu’tazila sect (as well as its current iteration, the Neo-Mu‘tazila). They have two very different definitions, neither present in The Anthropology of Islamic Law. This omission is significant.

Nakissa here switches the definition of Sunni Islam with the term mental attributes.
This is a blatant attempt to hijack an important tenant of the Neo-Mu’tazila sect, which is emerging in the Middle East to counter the brutality of Sunni jihadist ideology. The Neo-Mu‘tazila definition of godly mental attributes relies on man’s empathetic cognitive understanding of justice. According to the Neo-Mu’tazila, “justice is the most important mental attribute of God. Justice as a quality is associated with cognition, and it is the means by which man connects with God.”[2]This definition is vastly different from what Nakissa proposes.

Throughout his book, Nakissa persistently whitewashes the radical al-Azhar University in Cairo.[3] For example, in an apparent attempt to distance al-Azhar from the Hanbali school of thought—a philosophy adhered to by Salafi Sunni terrorist groups such as ISIS and al-Qaeda—Nakissa falsely states “al-Azhar University and related venues [are] typically associated with” schools other than the Hanbali school.

The opposite is true. Al-Azhar and related Islamist venues in Egypt are predominantly associated with the Hanbali school. In 2015, the current grand imam of al-Azhar, Ahmad at-Tayeb, stated that among the main reasons why the university adheres to the sub-sect school of Abu Hasan al-Ash’ari (874-936) and describes itself as an Ash’arite institution, is that Ash’ari “prefers Salafism and their thought which is represented by the Imam Ahmad ibn Hanbal.”[4]

It is only to be expected that an institution that adheres to the most radical of all orthodox Sunni schools is also among the most fundamentalist, jihad-propagating, state-run institutions in the world. Al-Azhar currently teaches its students that it is legitimate to cannibalize infidels, maim them, and gouge their eyes out.[5] Thus, it is hardly surprising that some of the world’s worst terrorists received their Islamic education there, including Omar Abdul-Rahman (the New Jersey Blind Sheikh), Abdullah Azzam (the leader of al-Qaeda’s precursor), and Abubakar Shekau (the leader of Boko Haram).

Also misleading is Nakissa’s attempt to legitimize the Islamist propaganda concept Wasatism, which he falsely frames as a sub-sect or movement in Sunnism. Wasatism was often misunderstood to signal moderation in the past decade in Egypt. This idea of Wasatism as moderation (from the word wasat, middle) is often used by radical Sunni theologians such as Ahmad Tayeb and Yusuf Qaradawi, the Muslim Brotherhood theologian. Islamists also use this term to recruit young people to militant ideas. Al-Azhar University officials and imams use the Wasatismmodel to appeal to parents to send their children to the institution. It is unclear whether Nakissa was confused by the word wasatism,or if he is knowingly spreading radical Islamist propaganda.

The idea of Wasatism as moderation has dramatically changed under the regime of
Egyptian president Abdel Fattah Sisi. Sisi has had frequent public battles with Muslim figures who promote al-Azhar’s violent teachings and radicalism while he has supported the ideas propagated by figures such as the Egyptian commentator and expert on Islamism, Islam Behery. Nakissa relied on Qaradawi to explainWasatism:

the Wasati school proceeds according to the middle way … it does not follow extremists in their extremism nor does it follow the lax in their laxity … it refuses both fanaticism and dissoluteness, believing in balance and moderation.

These are hollow words coming from Qaradawi, a man who has issued numerous radical fatwas, including advocating suicide bombings and the killing of homosexuals,[6] none of which Nakissa mentions. The author makes a further misleading claim that

certain elements of Wasatism can be traced back to the period between 1830 and 1880. It was during this period that Muslim religious scholars and intellectuals first began considering how liberal ideas might be reconciled with the Islamic tradition.

As an example, Nakissa lumps several scholars together, who had drastically different notions about the role of Islam in society. Two such examples from opposite ends of the spectrum were liberal Muslim scholar Rifa Tahtawi (1801-73) and jihad agitator Abd al-Qadir al-Jazairi (1808-83).

Nakissa also lays out ideas publicized by Muslim Brotherhood operatives but fails to mention their affiliations with that violent group. For example, he mentions Moroccan Brotherhood leader Ahmad ar-Raysuni, describing him as a “contemporary Moroccan Muslim legal scholar,” and “an influential global figure.” Nakissa omits that Raysuni is a prominent member of the Muslim Brotherhood and was designated a terrorist by the United Arab Emirates.[7]

These are only a few examples of many in Nakissa’s book. The pattern may be explained by Nakissa’s affiliations. He is actively involved with the Qatari-based, Muslim Brotherhood-run think tank, the Research Center for Islamic Legislation and

Ethics (CILE).[8] Headed by the convicted Egyptian terrorist Emad ad-Din Shahin, it frequently hosts Islamists such as Tariq Ramadan[9] as well as Qaradawi[10] and Raysuni.[11] CILE was founded in 2013, and according to its website, the organization’s first event was attended by Osama bin Laden’s friend Hassan at-Turabi, Qaradawi, and Islamism apologist John Esposito.[12]

Nakissa’s book is a propagandistic attempt to apply Western practice and hermeneutic theories to justify cultist and irrational aspects of Islamism. The Anthropology of Islamic Law wastes a good title in pursuit of a disorganized, Islamist disinformation effort riddled with inaccuracies, falsehoods, and omissions.

Cynthia Farahat, a Middle East Forum Writing Fellow and columnist for al-Maqaland al-Dustur newspapers, is currently at work on a book about the Muslim Brotherhood.

[8] “Internal Closed Seminar: Islamic Ethics: State-of-the-Art and Future Directions,” The Research Center for Islamic Legislation and Ethics (CILE), Qatar, Sept. 9, 2019; “What is Islamic Ethics and what is it for?” CILE, Oct. 1, 2019.