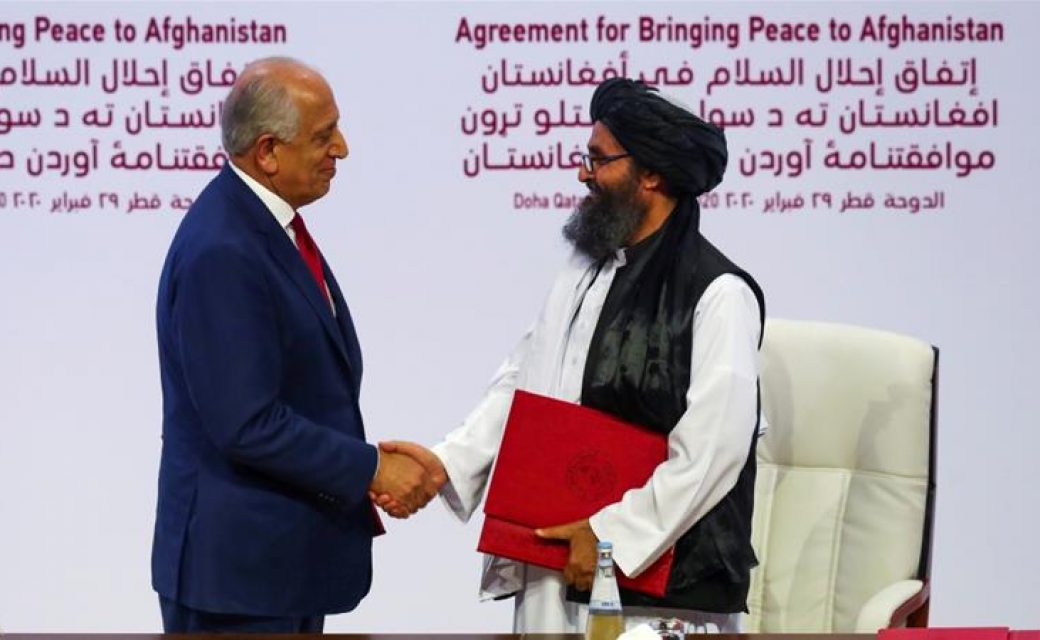 The United States’ failed policy in Afghanistan is likely to result in another 9-11.  President Barack Obama capitulated to the Taliban through a series of concessions, and the Trump administration has continued the same dangerous policies.  As the U.S. negotiates with the Taliban, the latter continue and plan to expand their terrorist activities.  The most recent indication is their demand from the U.S. to release Afghan narco-terrorist Hajji Bashar Noorzai from prison.  It’s time for President Trump to reverse this perilous course.

In February, the U.S. signed the Agreement for Bringing Peace to Afghanistan with the Taliban, an organization that has become the de facto leadership of al-Qaeda.  During this peace conference, Ambassador Zalmay Khalilzad, the current U.S. special representative for Afghanistan reconciliation, shared a panel with Mullah Abdul Ghani Baradar, a mass murderer responsible for the deaths of hundreds of U.S. soldiers.  Under Baradar’s leadership, the Taliban greatly increased U.S. casualties until Baradar’s arrest in Pakistan in 2010.

In 2009, Newsweek described Baradar as “cunning” and “more dangerous than [Mullah] Omar himself.”  The same article reports that Baradar said, “Rely on guerrilla tactics whenever possible.  Plant ‘flowers’ — improvised explosive devices — on trails and dirt roads.  Concentrate on small-unit ambushes, with automatic weapons and rocket-propelled grenades.”

Incredibly, Ambassador Zalmay was still pictured shaking Baradar’s hand in what had to be one of the most outrageous moments in U.S. foreign policy history.  Afterward, the popular Muslim Brotherhood operative and journalist Abdel-Bari Atuan described the peace agreement between the U.S and the Taliban as an “announcement of defeat” and “surrender” by the U.S.

U.S. foreign policy mistakes in Afghanistan can be traced back to 1979, but during the past decade, the policies toward the Taliban can be described as negligent at best or driven by subversive, anti-American ideologies at worst.  While we might never know the real motives, the fact remains that President Obama consistently aided the Taliban for almost a decade in a clear attempt to reverse many of President George W. Bush’s counterterrorism measures in the region.  These actions regressed America’s policy in Afghanistan to the same policies that led to the 9-11 terrorist attacks.

The current agreement guarantees that the mass murderers of the Taliban, al-Qaeda, and other Muslim Brotherhood terrorist organizations will operate military training grounds for every brutal terrorist organizations, transnational criminal groups, and narco- drug lords.  This puts the U.S. and the entire world in imminent danger.

While Trump wisely reversed Obama’s catastrophic Iran deal, he continued Obama’s failed approach to the Taliban.  The question then becomes, why is the Trump administration continuing Obama’s pro-Taliban policies?

The weaponization and politicization of intelligence is a double-edged sword.  Once any party is involved in it, it almost always backfires on everyone, because the manipulation of sensitive data can swiftly metastasize through intelligence organs.  While the overwhelming majority of counter-terrorism professionals are honest and patriotic, political leadership often pushes agencies into the wrong directions based on bad politics, misaligned priorities, and false data.

It is probable that Trump is receiving bad intelligence and the wrong advice on Afghanistan, because he is finalizing a series of incredibly dangerous policies that have to be reversed.

1. In 2011, the Obama administration attempted to start negotiations with the Taliban.  Then secretary of state Hillary Clinton said, “Over the past two years, we have laid out our unambiguous red lines for reconciliation with the insurgents: They must renounce violence; they must abandon their alliance with al-Qaida; and they must abide by the constitution of Afghanistan.”

As expected, the Taliban did the opposite and perpetrated numerous terrorist attacks that year, including attacking the U.S. embassy and NATO’s headquarters in Kabul.

2. In 2012, President Obama’s administration released five of the most dangerous Taliban terrorists from Guantanamo Bay who were closely associated with Osama bin Laden and al-Qaeda in exchange for the U.S. military deserter Bowe Bergdahl.

3. In 2013, not only was the Taliban not held responsible for its continued alliance with al-Qaeda and continued acts of terrorism, but the five terrorists who were released a year earlier were rewarded by the Obama administration and given their own “political office” in terror-sponsoring Qatar.

5. In 2016, Zawahiri renewed his oath of allegiance to the Taliban’s current chief, Hibatullah Akhundzada, after Mansour was killed by a U.S. drone strike in Southwest Pakistan.  This made the Taliban leader the acting head of al-Qaeda.

After Zawahiri swore allegiance to the Taliban, Obama said, “The only way to end this conflict and to achieve a full drawdown of foreign forces from Afghanistan is through a lasting political settlement between the Afghan government and the Taliban.  That’s the only way.  And that is why the United States will continue to strongly support an Afghan-led reconciliation process.”

Timeline of President Trump’s Continuation of the Obama Administration’s Policies:

6. In 2017, Arabic newspaper Asharq al-Awsat reported that Iran had provided the Taliban with military training, arms, and funds.  The paper quoted the governor of the Afghan Wardak Province, who said, “The strongest factions within the Taliban are Iran’s Taliban,” in reference to the Afghan Taliban members who resided in Iran.  In May, Iran sent almost three million Afghans back to Afghanistan, citing U.S. sanctions as an excuse.  It is highly possible that among them are the “strongest” of the Taliban fighters.

7. In 2018, Pakistan released Taliban terrorist and co-founder Mullah Abdul Ghani Baradar, from prison, based on a request from Qatar and the U.S.

8. During the summer of 2019, the Taliban became significantly deadlier, perpetrating 3,500 terrorist attacks.  It is not a coincidence that the considerable rise in terrorist attacks coincides with Baradar regaining charge of the group as its deputy commander.

There is not a single indication that the Taliban will stop terrorism until it is defeated and destroyed.  Last month, these people had the audacity to demand that secretary of state Mike Pompeo release narco-terrorist Noorzai.  It is expected that they will do the same with other narco-terrorists such as Haji Bagcho, whom American heroes risked their lives to bring to justice.  The likely reason the Taliban wants narco-terrorists released from U.S. custody is so these drug lords can resume their widescale funding of the Taliban and al-Qaeda.

These national security failures were sealed by the so-called “Agreement for Bringing Peace to Afghanistan.”  This deal will bring nothing but death, devastation, and destruction to Afghanistan and the rest of the world.  The agreement is an unnecessary capitulation that gives the Taliban a sovereign training area for transnational terrorists, organized criminals, and narco-terrorists.  This agreement will make Afghanistan a playground for terrorists and revert the U.S. to the policies that led to the 9-11 terrorist attacks.

Cynthia Farahat is an author and a Fellow at the Middle East Forum.