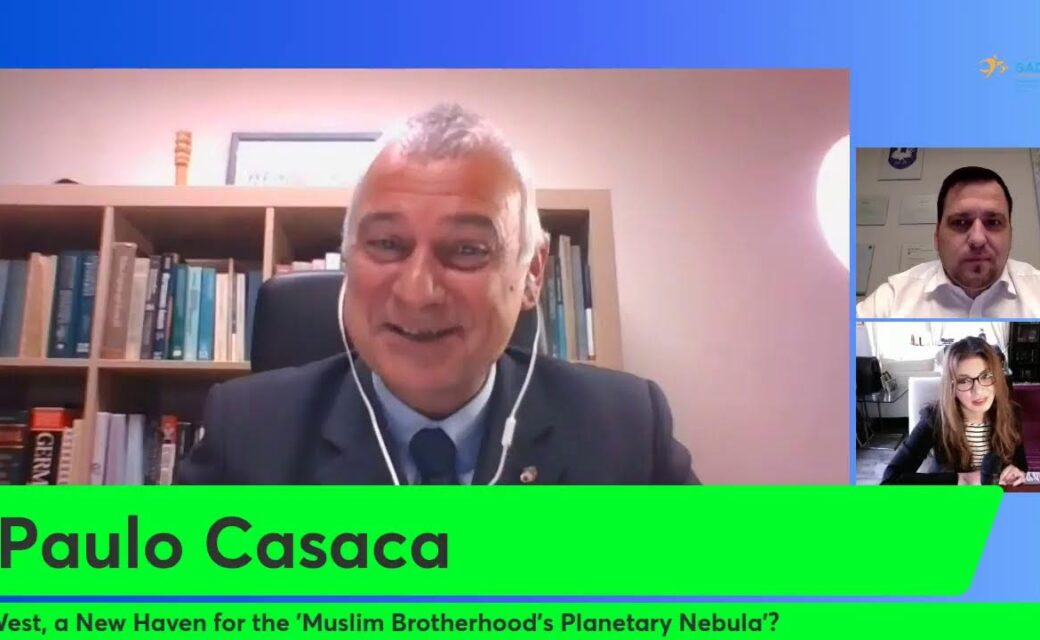 The West, a New Haven for the ‘Muslim Brotherhood’s Planetary Nebula’?

On November the 29th at 16H.00 (CET), SADF promoted an online conversation in the web platform StreamYard titled ‘The West, a New Haven for the ‘Muslim Brotherhood’s Planetary Nebula’?’

The conversation included the Member of the European Parliament (EPP, Czechia) Tomás Zdechovsky and the Egyptian-American author and political-analyst Cynthia Farahat as main speakers; it was moderated by SADF Director, Paulo Casaca. After the initial presentations, there was a public debate, also participated by those who followed the event through social media.

Tomás Zdechovsky is a Vice-President of the Budget Control Committee, and he has publicly declared his concern for the financial support provided by European institutions to front organisations connected with the Muslim’s Brotherhood’s network.

According to MEP Zdechovsky, both the European Parliament and the European Commission must wake up to the Islamic manipulation and infiltration of European society in general.

Despite numerous warnings and plenty of intelligence information, European Institutions continue to fund NGOs and various organisations directly or indirectly linked to the Muslim Brotherhood – and all of which undermine the humanistic and democratic values the EU is based on. Since 2004, € 79 billion have been provided by EU institutions to the Muslim Brotherhood and affiliated organisations. It is crucial that we understand why – and how this works.

To face this situation, we need greater information sharing between security intelligence agencies, national and international, and EU agencies, as well as closer forms of integration and cooperation between EU institutions and national agencies – namely as regards border patrol and other forms of security management, including the control of cash flows.

In November 2020 Germany ended its funding to an organisation after a federal audit showed it undermined democratic institutions, and in 2021 the Netherlands’ authorities did the same thing.

It is necessary to fight against all forms of disinformation, and namely the masking of radical Islam in moderate and pro-democratic speech by seemingly beneficial civil-society agencies.

Within this aim, the European Parliamentarian mentioned the need to first cut funds, then ban these fanatic Islamist organisations. It is necessary to fight against naïveté. European politicians often think they are working towards tolerance and inclusion when what they are doing is supporting fanatics.

Cynthia Farhat, who authored the recent best seller ‘The Secret Apparatus: The Muslim Brotherhood’s Industry of Death’ (27 September 2022) clarified that the ‘Secret Apparatus’ expression is what the Muslim Brotherhood calls its own, overt terrorist wing. Her book intends to fill a void of information regarding this global warrior apparatus. Many people think such apparatus is a thing of the past, but that is not the case.

The international Jihadi movement of which the Muslim Brotherhood is part can be said to have been born in its modern forms in the 1920s in Egypt. The goal is to create a global Islamic State ruled by Sharia Law; a Muslim Caliphate, to be imposed everywhere, the perpetual Jihad, to be fared everywhere.

Cynthia Farhat also stressed the strong links existing between the original Muslim Brotherhood and the fanatic islamist organisations that developed in both Iran and South Asia.

The conversation also focused on the manipulation of words and concepts through which the Muslim Brotherhood supremacist ideology is dressed in words of ‘tolerance’, ‘inclusion’, or ‘mutual understanding’ – as well as ‘Islamophobia’ applied to all of those who disagree with their fanatic ideology, hiding the fact that they are the ones who supress ruthlessly all Muslims who do not share their particular point of view.

Whereas most of the Muslim World is now quite aware of the threat posed by the Muslim Brotherhood ideology, it is puzzling to see the West as a haven to these extremist and toxic movement.